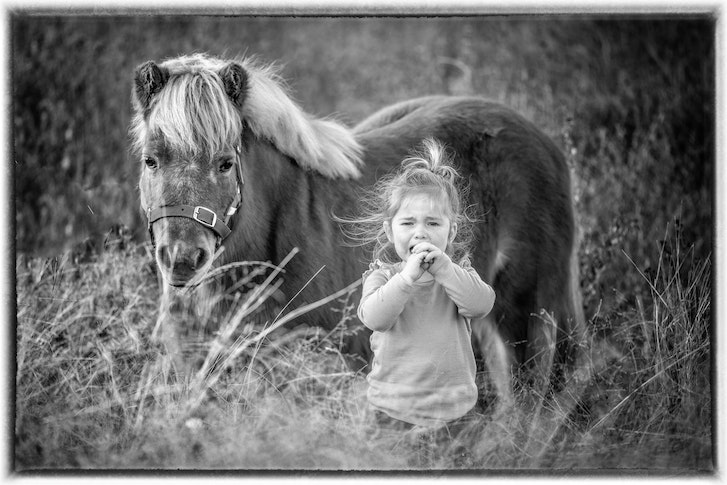 Working with Children and Animals

Whilst Millie was beside herself that I had suggested her shirt be changed for the photos (hence the meltdown lol), her darling shetland mare Gracie stood by stoically despite the nightclub level outpouring of grief and angst from Little Miss 2YO. It was too priceless a moment and the Nikon duly obliged.

A lot of people will look at a shot like this and say "it's not perfect, the child is crying. I don't like it." I'm the opposite. Photos are history. They need to tell a story. For me this is a wondrous reminder of my own experience raising a toddler quite a few decades ago: balancing an afternoon with a child who hasn't had a nap can be akin to negotiating a truce between Trump and his Chinese counterparts. Kids can be unpredictable; not angels 100% of the time, they throw tantrums, they often have snot on their faces or dirt wiped through their hair and many kick up a right stink once the favourite riding boots or ballet slippers are whipped off their feet to put on what the parents deem "more appropriate footwear for the photoshoot". Any photographer who has ever dealt with a young child, a horse, dogs, (a talkative cat), assistants and lighting for a shoot will tell you it can be a fine line between everyone fainting with relief that everyone survived unscathed (it's typically the parents needing the glass of wine post-shoot :-) - or it all going up a fiery lava of chaos.

Never underestimate the chaos though; it so often produces THE shot of the day.